Skip to main content
Home / News & Offers / Who are we Scots? Part Three

Who are we Scots? Part Three

If you're new to the series, why not catch up by reading Part One and Part Two of Who Are We Scots?

We begin this episode in 425 AD. At this time, the countries of England, Scotland and Wales did not exist. Instead, today's Scotland was split into three separate kingdoms: Pictland, Gododdin and Ystrad Clud. England was known as 'Britannia'. Take a look at my map below: 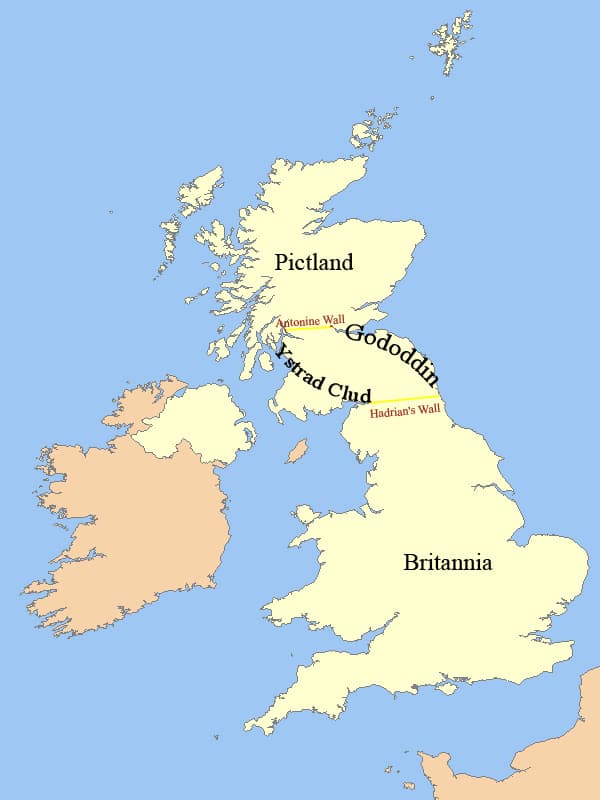 As you can see, the area known as Pictland (inhabited by the ancient Scots, The Picts) was located above the old Roman Wall 'Antonine', which had been built to keep the Picts out of Roman territory.

The modern-day Scottish Lowlands ventured as far south as Hadrian's Wall, located in Northumberland. Hadrian's Wall, much like the Antonine Wall, had been built to defend the Roman territory from the Picts. You can read more about the history behind the walls here.

But what happened to the Romans?

The island of Britain was difficult to keep free from raiding barbarians, both native and foreign, and was vulnerable to coastal attacks. In 410 AD, after mounting pressure from invasions, Emperor Honorius of the Roman Empire made the decision to abandon his territory of Britannia, and return the majority of his legions to Rome, leaving the natives to fend for themselves against the barbarian tribes.

The Romano-Britons in Britannia (as we can see above) had been under the control of Rome for over 300 years. With the island left without a leader and a vast amount of land without ownership, it did not take long for anarchy to ensue.

Irish barbarians travelled over the waters and raided modern-day Wales. The Picts moved south of Hadrian's Wall and invaded Britannia. The few Roman officials that decided to stay in Britannia attempted to form sub-kingdoms for themselves; those who failed to establish territory were assassinated by newly powerful clans.

By 425 AD, fifteen years after the Romans left Britannia, the area of modern day Scotland was split into three areas:

Pictland
Gododdin
Ystrad Clud
You can see these closer below:

The Kingdom of Gododdin was formed by the largest tribe in the area, the Otadini. It was named after one of the Otadini's most powerful families and was centred on the ancient hill-fort of Traprain Law. This very hill-fort can be seen on our Rosslyn Chapel tour.

The most famous of the Gododdin Kings was King Lot, who features in the legends of King Arthur. Legend states that King Lot had a daughter, who unfortunately fell pregnant to someone the King did not approve of. He became angry and had his daughter thrown off the steep hill-fort Traprain Law (see right). Miraculously, both she and her baby survived. Her baby boy became Saint Mungo (also known as Saint Kentigern), the founder of the City of Glasgow. You can visit his grave at Glasgow Cathedral.

The West Lowlands became Ystrad Clud, which is Brittonic for 'the Kingdom of Strathclyde'. The kingdom's centre was located on ancient volcanic rock at modern day Dumbarton, only a few miles away from modern day Glasgow. The remains of the hill-fort can be seen on the right hand summit on the left picture, and can be seen on our 1 day Loch Ness and 1 day Oban tour from Glasgow.

The Formation of Britain

We now enter a timeline where momentous changes were just around the corner for the Island now known as Britain; changes that would begin to shape the character of the peoples on the island; changes that would result in the emergence of the Kingdoms of Scotland, England and Wales; changes that would have an effect on parts of modern day France and Spain and give birth to legends such as King Arthur and Old King Cole.

Where did the term Anglo-Saxon come from? Where did we get the word Scots or Scotland from? When did Edinburgh come into being, and what did all of this ancient history have to do with the Lord of the Rings?

Find out in the next blog - Who are we Scots?