At Timberbush Tours, we have a vast range of tours, spanning from the Scottish Borders and the north of England, all the way to John O’Groats at the top of Scotland. We offer something for everyone; whether you’re a whisky fan, a lover of dramatic scenery, Highland cows, castles or even the TV show, Outlander. However, sometimes one of our tours just isn’t the perfect fit for you.

You dream of going somewhere completely unique, crafting your own special, one-of-a-kind tour across Scotland, or even tours of Britain, visiting England and Wales as well as Scotland. Luckily, we are here to help you with that. With our private tours team, that’s exactly what we do. We ensure you get to fully customise your experience, so you and your group can have an experience like no other. Or, if you’re not quite sure on where you want to go, our Expert Planners are always available to create something completely bespoke for you.

Working with our Private Tours team, you will work with a dedicated expert planner with whom you can invent a completely custom-made tour in which you choose the destinations, the duration, and even the departure point – wherever is easiest for you. You don’t need to worry about public transport, ferry crossings or dealing with transfers as your private coach and driver-guide will take you exactly where you have planned to go.

The choice is completely up to you, if there’s a road to it (or even a ferry), we can take you there. You would get your own private, luxury coach, suitable for up to 53 passengers per coach, and your very own driver-guide who will take you where you want to go and share with you some amazing stories, music, and facts about the history of the area that you’d expect on any other Timberbush Tour, except - it’s just for you and your group! 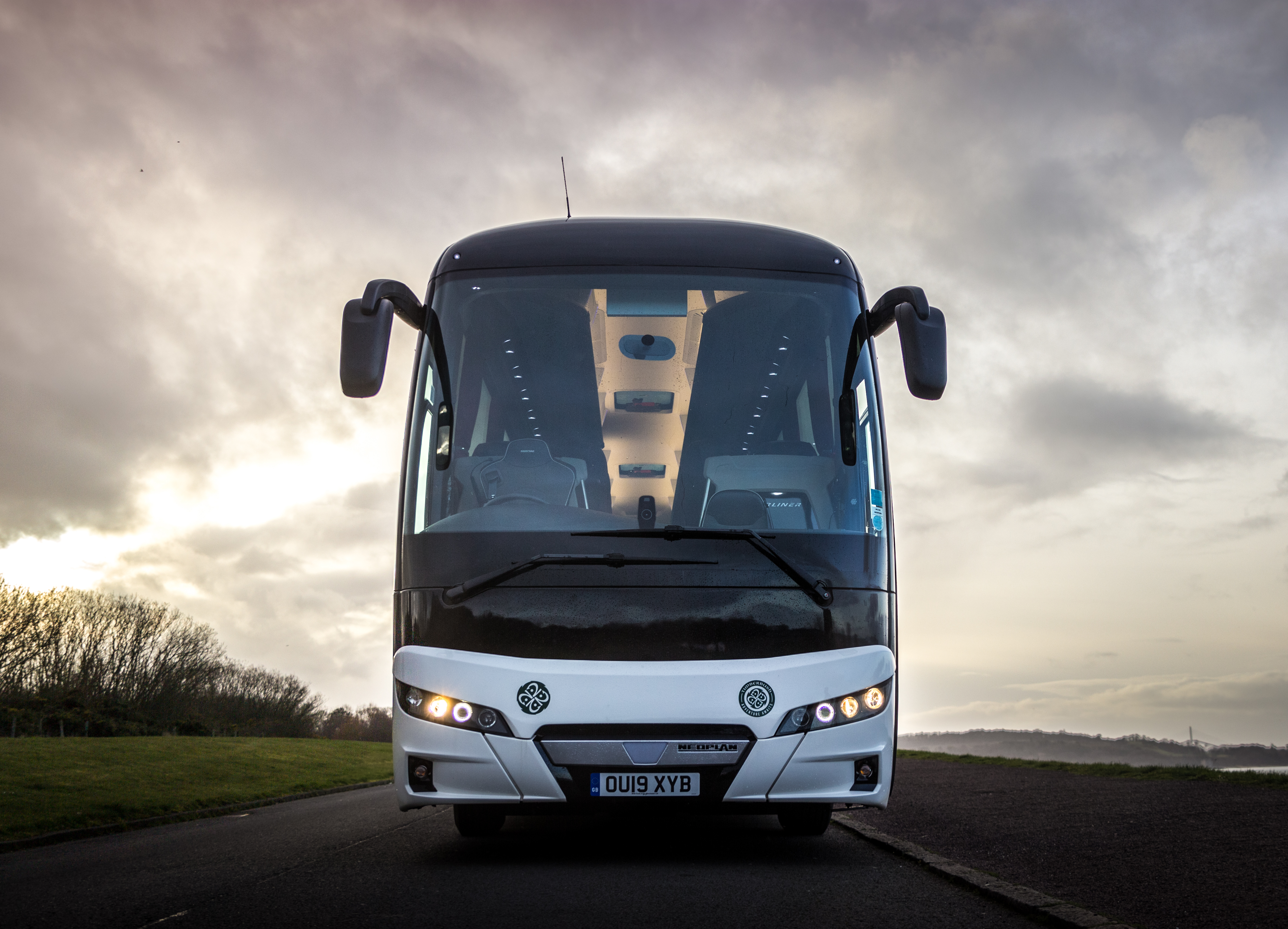 Our modern, luxury fleet of air-conditioned coaches range between 10-53 seats, meaning no matter the size of your group, we’re able to cater to it and provide our unforgettable Timberbush Tours' experience. We pride ourselves on the fact that we operate one of the greenest fleets in the United Kingdom, having been awarded Gold in the Green Tourism Business Scheme as well as 5-stars in Eco Stars Fleet Recognition Scheme. To read more about our awards and what we are doing to ensure that as a company we are as green and environmentally friendly as we can possibly be, follow this link.

What’s more, in today’s climate, the safety of our guests is more important than ever. We keep our coaches incredibly clean by conducting a deep-cleaning and disinfecting regimen after each tour, as well as disinfecting all touch points throughout the day. Our driver-guides adhere to all government guidelines whilst on tour to ensure it is safe and enjoyable for everyone. Alcohol gels are also available at the entrance door to all of our coaches to prevent spreading germs. One other benefit of booking a private tour is that if you are concerned about sharing a coach with other people that aren’t in your bubble, a private tour coach belongs entirely to your group, further reducing the risk of any possible infection.

As it’s just for your group, our Private Tours are also ideal for work events. A Timberbush Tour private tour for your company could be a great alternative to the usual team Christmas night out, staff day out, or team experience day. So if that's something you are looking to book, don't hesitate to get in touch.

With all the places you could visit, it might be a bit of a daunting task to start thinking about your dream tour. So, if you’re stuck for inspiration, we’ve created a couple of itineraries for tours below to give you an idea of where we could take you and what you could see, do, and learn.

Are you a fan of whisky? Does the idea of a wee dram by the fire on one of Scotland’s most beautiful islands, surrounded by dramatic scenery (and potentially a bracing west coast wind) sound like the perfect cosy night?

Scotland is world renowned for whisky, known as scotch whisky across the world, or simply scotch. Here, it is known in Gaelic as “uisge-beatha”, or “the water of life”. Whisky is one of Scotland’s most important exports and industries, and a crucial part of our economy. It is made all over the country and split into 6 main regions: Highlands, Speyside, Lowlands, Campbeltown, Islands, and Islay. Each region often having its own characteristics, but with many sharing similarities.

Islay is home to no less than 8 of, what are said to be, some of the best distilleries in Scotland and the world, with more on the way - giving credence to the island’s reputation as a whisky haven. As you can imagine, all these visitors to a small island in the summer can lead to it getting busy, so winter can be a great time to go. It might be a bit chilly, potentially windy, but isn’t that what Scotland’s all about? Plus, the whisky will keep you warm anyway!

Whilst on tour, we could stop at the following distilleries:

Bowmore Distillery – the oldest licensed distillery on Islay and one of the oldest in Scotland.

Ardbeg Distillery – founded in 1815 and still going strong today, despite closing briefly in the 1980s. Ardbeg is also the only distillery in the world that can say it was the first whisky in space after having 20 vials sent to the International Space Station in 2011. The whisky was returned in 2014 for tests to investigate the interaction.

Lagavulin Distillery – the favourite drink of Parks and Recreation’s character, Ron Swanson, featuring many times in the series, especially when the character visits the distillery.

Laphroaig Distillery – often considered one of the most strongly flavoured whiskies on the island, using the local flavours of the island and its abundance of peat.

Bruichladdich Distillery – a distillery doing things a bit differently to the others, producing one of the only unpeated whiskies on an island so famous for its unique, often heavily peated (smoky flavoured) whiskies.

The island is quite small at around 25 miles long, so travelling between the distilleries won’t take too long, and you’ll get to see almost every corner of the island, taking in the magnificent sea views and local wildlife as you do so. So, if your favourite dram doesn’t come from one of the distilleries above, we can go to another instead.

During the time on the island, we can arrange two-nights’ accommodation at your choice of hostel, bed & breakfast or hotel.

Do you want some great whisky without having to jump on a ferry, and also see some historic landmarks on the way? This one-day tour could be the perfect option for you. This is a great tour if you’re a whisky novice or expert but also want to experience more of Scotland by visiting historic sites, monuments and landmarks. On this tour we can stop at some of the following locations:

The Kelpies – opened in 2014 and already one of Scotland’s most iconic sculptures standing at over 100ft, the Kelpies are the tallest sculptures in Scotland and the largest equine sculptures in the world. To learn more about The Kelpies, and the creatures that inspired them, follow this link.

Stirling Castle – one of the largest castles in Scotland and an architectural marvel, this castle dominates Stirling’s mountainous skyline. Some of its structures date back as early as the 14th century and it had been the site of the crowning of some of Scotland’s kings and queens including Mary, Queen of Scots as well as being the location of the baptism of Mary’s only son, James VI of Scotland, and James I of England.

The Birks of Aberfeldy – a circular path through mixed woodland, named after a poem by one of the most famous Scots of all time – Robert Burns, of whom a statue sits at the entrance to the path. A must visit for any poetry fan. The name of this tour takes inspiration from a famous Robert Burns’ poem, The Author’s Earnest Cry and Prayer, as well as an episode in season three of Outlander.

Dewar’s Distillery – set in the heart of Perthshire, this distillery offers an amazing whisky and chocolate tasting after  a tour of the distillery.

Pitlochry and Blair Athol Distillery – situated in Pitlochry, another of Scotland’s oldest working distilleries, it stands at the gateway to the Scottish Highlands. It’s source of water – the Allt Dour – flows through the grounds from the nearby Ben Vrackie, leading to the whisky’s distinct flavour and smooth finish.

Dunkeld – a picturesque village separated by its neighbouring town of Birnam by the river Tay. It was the site of the 1689 Battle of Dunkeld, fought between Jacobite soldiers supporting the restoration of the then deposed Stuart king, James VII and a government regiment supporting the usurper William of Orange and Queen Mary II.

Don’t just take our word for how great our Private Tours can be, and how we can make the process as easy as possible with our dedicated expert planners. Here is a selection of testimonials from previous customers who have customised their own unique tour using our Private Tours service.

Those are just a few ideas of the kind of tour you could create with us. If you ever want to know more about them, just give our Private Tour team a ring at 0131 226 6066 or send an email to bespoke@timberbushtours.com and they’d be happy to talk you through the process of making your dream tour a reality. Or, view our Private Tour page here on our website to learn a wee bit more about them, the service we provide, and the coaches that we use.

We’re excited to see where we can take you, and where you can take us – the sky’s the limit!

7 things you should pack for your Highland Bus Tour