You may recognise and associate the name kelpie with The Kelpies, the 30m high metal equine structures near Falkirk (shown below), however we’ll be discussing what inspired them, the malicious kelpies from Scottish folklore. Kelpies are malevolent aquatic spirits and nearly every loch, pool or body of water in Scotland has a story about water spirits associated with it.

The origins of the kelpie are believed to be rooted in human sacrifices to the water gods however this concept eventually died out and the story of the kelpie was then used to keep children from playing too near to lochs and dangerous rivers. It also encouraged women to be wary of good looking strangers.

They are shape shifters that most often appear as a horse but they can also take human form. Many reports stated that you could spot a Kelpie in human form by looking for water weeds in his/her hair or by looking at it’s feet as they keep their hooves when they transform. This is similar to the concept of Satan minus the horns and tail usually associated with many depictions of the religious entity. They are referenced in the poem "Address to the Devil" by famous Scottish poet Robert Burns:

Whilst the stories can be fearsome, the giant sculpture of the Kelpies found just outside of Falkirk are far less scary, and, you can visit them on our tour of Loch Lomond, Stirling Castle, and The Kelpies if you're feeling brave.

Why the Kelpie is Dangerous

When in horse form the kelpie will often stand near the edge of rivers waiting for their prey which is often young children. Their bodies are magically adhesive which allows them to drag people into the water to drown them. It is said that kelpies can stretch the length of their backs to carry several people to their doom together. One particular tale involved some children who met a kelpie, all but one climb on to it’s back while the last child stays on the shore. He pets the neck of the kelpie to find his hand is attached to it. He frees himself by cutting off his hand and survives the encounter with the malicious creature only to helplessly watch his friends being dragged down into the depths of the water where they were devoured and their entrails thrown to the waters edge.

The human form can also be deadly. Kelpies are almost always male which is why women were warned to be cautious when meeting handsome strangers however many other accounts of the kelpie suggest that it looks more like a rough looking, hairy man that leaps at people and crushes them in his grip and then tears them apart and devours them.

Kelpies are usually considered evil however a story from the island of Barra in the Outer Hebrides details the efforts of a lonely kelpie that was looking for love and so shape shifted into a handsome man to help win the heart of a women who he wanted to take as his wife. He was recognised as a kelpie and she removed his necklace (his bridle in human form) while he slept causing him to revert to his original horse form. She then takes him to her father’s farm where he is forced to work for over a year before taking him to see a wise man who tells her to give him the necklace back. Now, back as the human she first met, the old man asks him if he’d rather be a kelpie or stay as a mortal. He turns and asks the woman (who essentially enslaved him) if she’d be his wife if he stayed a man. To which he said yes and they got married. Weird, but far from the usual frightening kelpie stories.

How to Tame and Kill Kelpies

Many others supposedly used the method of removing the bridle to capture kelpies for use in agricultural work as they were said to have the strength of 10 horses. In several tales, removing the bridle from the kelpie allowed the one who took it to have control over it and other kelpies. Clan MacGregor even claimed to have one that they passed down through generations. Other stories suggested that removing the bridle would allow control but it would die within a day if the bridle was not returned. Another way to kill a kelpie would be to shoot it with a silver bullet (similar to werewolves) which would turn it into a strange jellyfish looking pile of squishy mass. Using crosses and saying Christ’s name have also be cited to be methods of defending against kelpies. 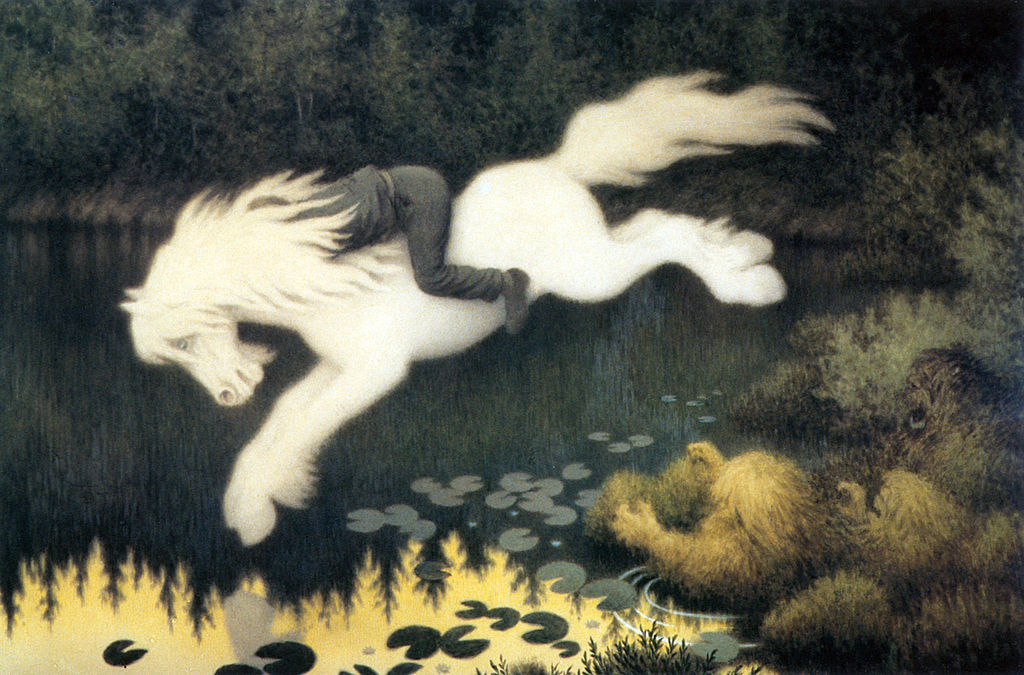 Due to every loch in Scotland having a kelpie story there’s always going to be differences in their versions of the water spirit. Many are likely regarding the each-usige, another water spirit that also takes on the form of a horse but it is far more vicious than the kelpie. Kelpies inhabit rivers and streams while each-uisge are found in lochs and the sea. It is said that the rider of an each-uisge is safe inland until it smells or sees water in which case its skin will then become sticky and it will run towards the nearest loch to drown its victim.

Most stories were probably told to encourage certain behaviours like trying to get children to be careful near rivers and lochs but it’s not surprising that stories of these shape shifters haunted the dreams of our ancestors.