The History of the Scottish Flag

The Flag of Scotland, also known as St Andrew's Cross or the Saltire, is essentially just a white cross on a blue rectangle. Its design may seem fairly simple, but the significance of it is steeped in rich history and it is one of the oldest flags in the world still in use today.

We look into the significance of its shape, the origins of the Scottish flag and some information about the alternative flag used by royalty.

Design of the Scottish Flag

The Scottish Saltire FlagThe white diagonal cross on the flag is known as a ‘saltire’, which means ‘a cross with diagonal bars of equal length’. This stems from the old French word saultoir or salteur, a word to describe a type of stile constructed from two cross pieces.

The flag’s proportions aren’t fixed, but is often in the ratio of 3:5. The white bars of the cross also don’t have a fixed proportion, but is usually one-fifth of the width of the flag. Proportions were originally more important on the design of shields.

The blue background of the flag has had various shades of blue over the years, ranging from sky blue to navy blue. Historically, this is due to the production of natural dyes being plant-based, so even soil quality would have an impact of the shade of blue produced on fabrics.

With the union of England and Scotland, the Union Flag used a consistent navy blue colour, and this was increasingly used for the Saltire flag as well. This meant flag manufacturers had difficulties in agreeing with using only one shade. The variation in shades of blue led to a committee within the Scottish Parliament to standardise the colour of the national flag. In 2003, they agreed that a Pantone 300 colour would be the standard blue, a slightly different shade to the Union Flag. 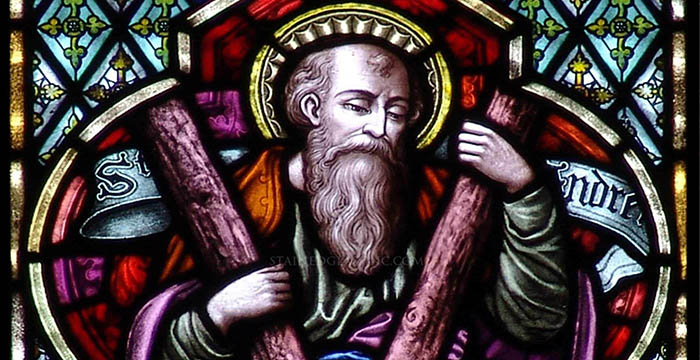 Origins of the Saltire

The Scottish flag is almost 500 years old, but the story of its origins pre-dates this; all the way back to biblical times.

In 60 AD, Saint Andrew (later known as the Patron Saint of Scotland) was crucified. Legend has it that he felt unworthy of being crucified on a cross similar to one Jesus Christ had died on, so it was arranged he would be crucified on a diagonal cross, also known as a saltire. Some historians believe there is an alternative theory to this; that St Andrew was instead crucified by the Romans in Greece, where this diagonal cross was more commonly used. The story also has it that St Andrew commonly wore blue robes, and it was the blue robe against the white wood of the crucifix which inspired the design of the Scottish flag.

Fast-forward to over 700 years later, and King Angus II led an army of Scots and Picts in the Lothians where they fought the Saxons. The King’s army was completely outnumbered and defeat was imminent.

There are two tales about what happened that day; Angus saw the formation of the saltire in the clouds and vowed that if they won the battle, he would make Andrew the Patron saint of Scotland and his cross as the new flag. Other accounts suggest Angus had a vision or dream involving Andrew, who promised triumph in battle. Either way, the King won and the Saltire became a symbol of Scotland forever more.

The Lion Rampant Royal Flag of ScotlandThe blue and white flag is easily recognisable and the one most associated with Scotland all around the World, but did you know there’s another flag as well?

The Royal Banner of Scotland, more commonly known as Lion Rampant of Scotland, was historically used by the Scottish Monarchs. This flag differs in use from the Saltire, as it can only be used by royalty. As there hasn't been a Scottish King or Queen since the 17th Century, it now belongs to Queen Elizabeth II.

Its design is radically different from the national flag, predominantly being yellow with a red border and lion. The design originates from King Richard’s reign, with the English using an emblem of a rampant lion on its hind legs. This lion was eventually used for the Scottish Coat of Arms and incorporated into the Great Seal of Scotland.

According to an Act of Parliament from 1672, it is an offense for any citizen or corporate body to fly or wave this flag, which is why you won’t see it very often.

Unofficially though, it’s often regarded as the second nation flag and is often waved at sporting events, or seen in gift shops, even though technically it is illegal to use them!

Hopefully you've learnt a little about the history of our nation's flags. Timberbush Tours offers a range of coach tours across Scotland if you fancy doing some flag spotting! You can also go on our one day tour from Edinburgh and visit the pretty town of St Andrews, which was named after Saint Andrew.