The Murders and Mysteries of Glencoe

The remains of an ancient super-volcano, further formed by an ice-age glacier, Glencoe is considered one of the most breathtaking location in Scotland. The south side of the glen is characterised by a succession of beautifully dramatic peaks, such as Bauchaille Etive Mor, Bauchaille Etive Beag and the Three Sisters. 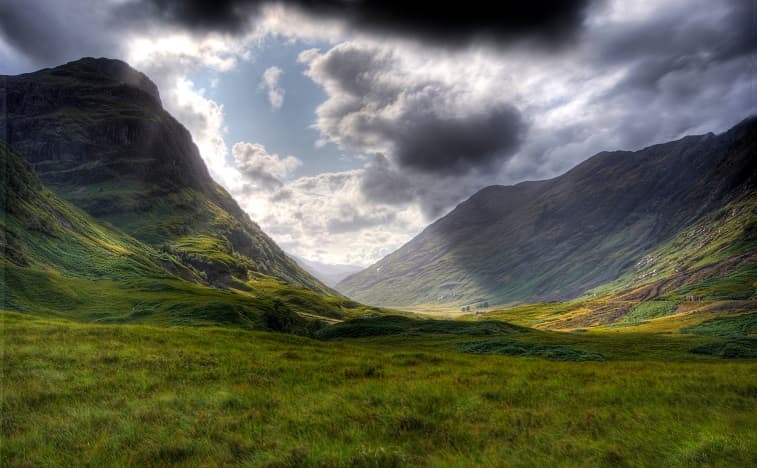 Some call Glencoe the Glen of Weeping, due to the massacre that took place in 1692.

The Glen used to be owned by the Clan Donald, one of Scotland's largest clans with numerous branches. The Clan fought with Robert the Bruce at Bannockburn and were given honorary status by the King, proclaiming they would always occupy the honoured position on the right wing of the Scottish army.

However not everyone was as enthusiastic about the Clan Donald.

The Clan had enemies. New monarch King William offered all Highland Clans a pardon in their part of the Jacobite Uprising, in return they must take an oath of allegiance before 1st January 1692 in front of an official magistrate. Clans who did not comply were threatened with reprisals.

The winter of 1691 was harsh, and many clans were unable to take the oath on time. MacIain of Glencoe, a branch of the Clan Donald, was instructed to travel to Inveraray but was unfortunately late to take the oath after being delayed on purpose at Barcaldine Castle.

Despite his late arrival, MacIain left Inveraray satisfied that his Clan would face no reprisals, but little did he know the Secretary of State, John Dalrymple, was waiting for an excuse to make an example of one of the Clans, and was delighted to hear MacIain of Glencoe had not sworn the oath on time:

"My Lord Argyle tells me that Glencoe has not taken the oath, at which I rejoice. It is a great work of charity to be exact in the rooting out of than damnable sect, the worst in all the Highlands."

Approximately 120 troops arrived at Glencoe in February under the command of Captain Robert Campbell of Glenlyon, a senior clansman of the Clan Campbell. Under the rules of Highland Hospitality, the Clan Donald welcomed the troops into their homes, gave them food, drink and lodgings for as long as they required. For the next 10 days, they took advantage of this customary tradition and bided their time before they were ordered to attack.

"You are hereby ordered to fall upon the rebels, the MacDonalds of Glencoe, and put all to the sword under seventy. You are to have a special care that the old Fox and his sons do upon no account escape your hands, you are to secure all the avenues that no man escape."

At 05.00 hrs in the early winter morning of February 1692, the massacre began. Alasdair MacIain of Glencoe was shot dead as he rose from his bed, houses were set alight and captives were bound hand and foot before being slaughtered. Gunfire woke many from their beds, giving them time to flee in to the mountains.

38 men, women and children were killed, and many more died from exposure to the freezing conditions in the mountains.

As word of the massacre spread across Scotland, the Government did what it could to cover up the atrocities, however King William was finally forced to launch an enquiry in 1695. No trial was ever held.

"Cruel is the snow that sweeps Glencoe and Covers the graves of Donald."