The Flora of Scotland

Scotland’s highlands, islands and dramatic landscape are home to a vast array of beautiful flora. Here is a short description of the three types of flora that have become to be symbols of Scotland: 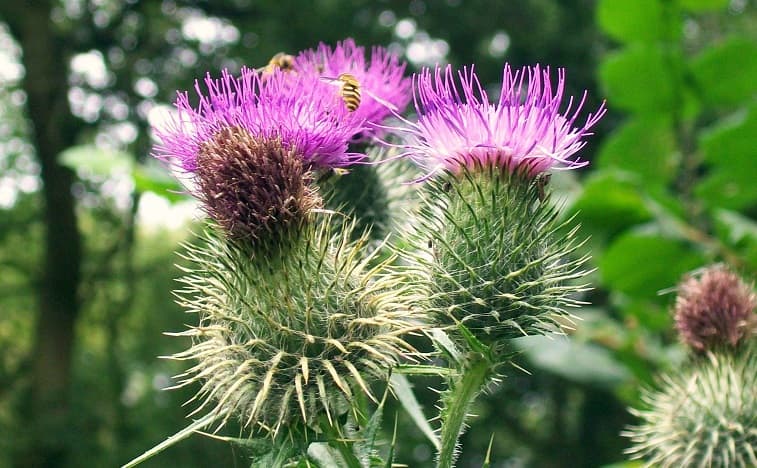 Beside tartan, the Scottish thistle is one of the most recognisable symbols of Scotland and the emblem of a nation. It can be seen everywhere you look: on the Scottish international Rugby team’s strip, in businesses and organisations, even as the emblems of the police and football teams. However, nobody is sure as to how the thistle came to be a Scottish symbol. Legend states sleeping Scots fighters were saved from ambush by an invading Norse army after one of the attackers accidentally stood on a thistle with his bare foot. His cry woke the warriors and raised the alarm, which resulted in the Scots successfully defeating the intruders. The warriors were so pleased with a victory thanks to the lowly thistle, they gave it prized status as a symbol of Scotland.

The Rowan Tree has mythical roots that stem back to classical times, prominent in Norse mythology as the tree from which the first woman was made. In the British Isles, the tree has become a symbol to protect those from witchcraft and was commonly planted in people’s front gardens to protect them from evil enchantments. Pieces of the tree were carried for personal protection, and sprigs were used to protect livestock, especially cows, and their dairy produce from curses. There are documented cases as late as the latter half of the 20th Century warning against damaging or removing Rowan trees.

The Scots Gaelic name caorunn (pronounced choroon, the ch like loch) for Rowan Tree can be found in many place names in the Highlands and Islands, such as Beinn Chaorunn in Inverness-shire and Loch a’chaorun in Easter Ross. The tree was also the clan badge of the Malcolms and McLachlans.

Heather is an iconic symbol of Scotland. It grows freely and abundantly, covering the moors and carpeting the glens and highlands with beautiful lilac hues. It is estimated there are over 5 million acres of heather spread all over Scotland, and is probably the reason behind the Scots adopting it as one of their national flowers.

As heather has been so readily available for centuries, it has been a useful household commodity. Evidence has been found in a 4000 year old village on the island of Orkney of dried Scottish heather used as a mattress and heather stems used as ropes. It also played a major part in the construction of homes, being fashioned into walls and thatched roofs. In some areas of Scotland, heather stems were integrated into farming equipment, such as hoes and rakes, due to its strength and durability.

With over 300 privately-owned gardens now open to the public thanks to Scotland's Gardens, why not take a tour with us and discover the beauty of Scotland's flora for yourself?