The Doomed Destiny of Mary, Queen of Scots - Part 1

Mary, Queen of Scots is arguably one of the most famous monarchs to have their head chopped off, but delve a little deeper and you’ll find murder, deception and death were all associated with her short life. Both the public and historians are divided on who really was Mary, Queen of Scots; a Catholic martyr, driven by the love of her God and people, or a cold & calculating adulteress, who would stop at nothing to achieve her ambitions. Why don’t you decide... 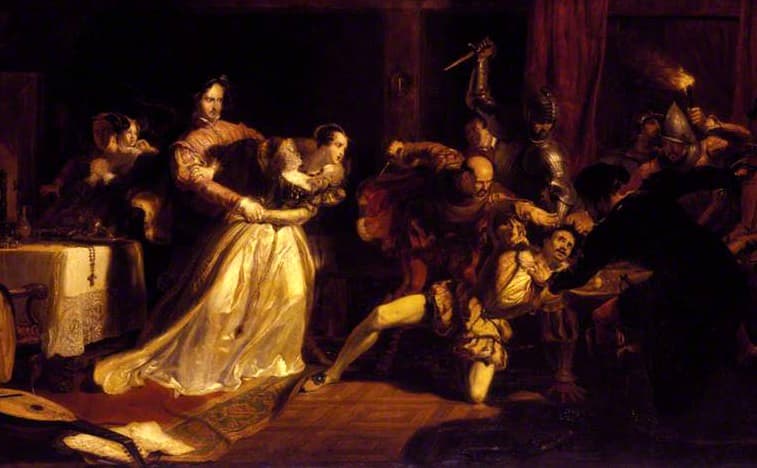 Mary was born in Linlithgow Palace into a Catholic Scotland. Her father, King James V of Scotland, and her French mother, Mary of Guise, were both devout Catholics; King James V persecuted a vast number of outspoken Protestants during the Reformation, burning them at the stake as heretics. According to Historians, Henry VIII of England, ruler of a Protestant country, desperately tried to persuade King James V against the prosecution of Protestants, however James refused. This refusal was regarded by English observers as a sign of solidarity between Scotland and Catholic France.

By the time Mary ascended the throne at only six days old, she was diplomatic dynamite. Both the English and French monarchy were interested in pairing her with their sons. With a successful union, the winning monarchy would have their son as King of Scotland, in turn solidifying the relationship with the Scottish nation, whilst also gaining influence and power.

This sparked a fierce struggle between the two monarchies of England and France, each trying to successfully pair their sons with the Scottish Queen. Mary was first promised to King Henry VIII’s son, Edward, however the Scots began negotiations with the French. Henry was furious, but despite his protests, Mary was sent to France to be betrothed to the heir to the French throne, Francis.

Unfortunately Mary’s reign as Queen consort of France was short-lived, as her husband, Francis, died after only two short years of marriage. She was heartbroken, and returned to Scotland a widow in 1561, at the tender age of 18.

Mary returned to Scotland not only to live, but to rule as Queen of the Scots at only 18 years old. The atmosphere between England and Scotland at the time was very tense; Henry’s daughter, Queen Elizabeth I of England, who was also Mary’s cousin, was now on the English throne and watching her very, very closely.

Little did Mary know, that only seven years after her arrival in Leith, Scotland, she would lose her power, her influence and the crown.

The suspicions of Queen Elizabeth I of England

Queen Elizabeth I of England was the daughter of Henry VIII’s second wife, Anne Boleyn. In 1537, Henry had grown tired of his unfruitful marriage with Catherine of Aragon. His affections turned to a young Protestant girl, Anne Boleyn. As his country was officially Catholic, and did not recognise divorce, he decided to break away from Catholicism and create an entirely new church, the Church of England. This was to be of a protestant denomination, allowing him to part ways with Catherine of Aragon and marry his new love interest, Anne Boleyn. Henry and Anne bore one child, Elizabeth Tudor, however in the eyes of Catholic Europe, Elizabeth was an illegitimate child and not the rightful heir to the English throne.

Due to her father’s actions, Queen Elizabeth I of England was very aware that a large number of people considered her Catholic cousin, Mary, to be the rightful heir to the English throne. Mary had been brought up as a devout Catholic, however by the time she returned from France to Scottish soil, parliament had passed three laws officially making Scotland a Protestant nation. This, however, did not ease Elizabeth’s mind and she made sure her cousin was watched very closely.

One of Mary’s preoccupations when she returned to Scotland was who she should marry.

As far as she was concerned, marriage was a diplomatic union and had nothing to do with romance. One of the prime candidates was Lord Darnley, a member of the Lennox-Stuart family and also her cousin. As a great-grandchild of King Henry VII, he too had a claim to the English throne and united together with Mary, they could be very powerful. Darnley also had a Protestant father and a Catholic mother. Mary was very careful to choose a suitor who would not only show her allegiance to her Protestant nation, but also appease her Catholic ties in Europe. For these reasons, her union with Lord Darnley seemed to be ideal and they were married in 1565.

However, not everyone was thrilled with the news. Elizabeth, Mary’s cousin, was absolutely furious. Any English nobleman was required to ask for the Queen’s permission before they married. Not only did Lord Darnley not ask permission, his union with Mary was strengthening her claim to the English throne and Elizabeth was not given the chance to refuse it.

Mary soon came to doubt her choice of partner. Shortly after the wedding, she realised her partner was arrogant, irresponsible and a drunk. He neglected his duties and often spent nights engaging in debauchery, which embarrassed Mary and caused a stir. He grew power-hungry; his title of King Consort, ie. Husband of the reigning queen, did little to satisfy him, and he demanded to be co-sovereign of Scotland, with the right to keep the Scottish throne should be outlive his wife. Mary refused his request, causing them to drift further apart, and as Darnley spent less and less time with her, Mary grew increasingly close to her advisor, an Italian courtier by the name David Rizzio.

The advisor to the Queen

David Rizzio was a Catholic Italian musician, who played in the court and eventually ascended to the role of Mary’s private secretary. They became very close during the breakdown of Mary and Darnley’s relationship, and although there was never any evidence of an affair, the streets were rife with gossip and Darnley was deeply jealous. Many believed Rizzio’s relationship with the Queen was his way of gaining more power and only infuriated his peers. Others believed Mary, who was heavily pregnant at the time, had fallen pregnant with Rizzio’s child.

In March 1566, a group of Protestant nobles burst in on Mary’s dinner party and murdered Rizzio in front of her eyes, stabbing him over 56 times as he clung to her skirts in terror. Darnley’s dagger was left at the scene, implicating him in the murder.

After the murder of her advisor, Rizzio, and the birth of her son, James, in June 1566, Darnley slid further into a life of debauchery, neglecting his royal duties and displaying a sullen resentment towards Mary and her relationship with her new advisor, James Bothwell, Lord Admiral of Scotland.

Bothwell had run to Mary’s aid during a Protestant rebellion, and although he had a reputation for bravery, Bothwell was also known to be lecherous, brutal and power hungry. Mary regarded him as her saviour and he quickly became her most trusted advisor.

Darnley’s resentment of James Bothwell only pushed Mary further away. In February 1567, there was an explosion at Darnley’s estate just outside of Edinburgh. Darnley was found in the garden, dead, apparently strangled.

Did the Queen know this was going to happen? Was Mary behind the crime? Find out more in Part 2 next week...