The Battle for Scottish Independence

Robert I, known as Robert the Bruce, was King of Scots from 25th March 1306 until his death in 1329. He secured Scotland's independence from England in the middle ages and was arguably one of Scotland's greatest Kings and most famous warriors. Today in Scotland, Robert the Bruce is a national hero. 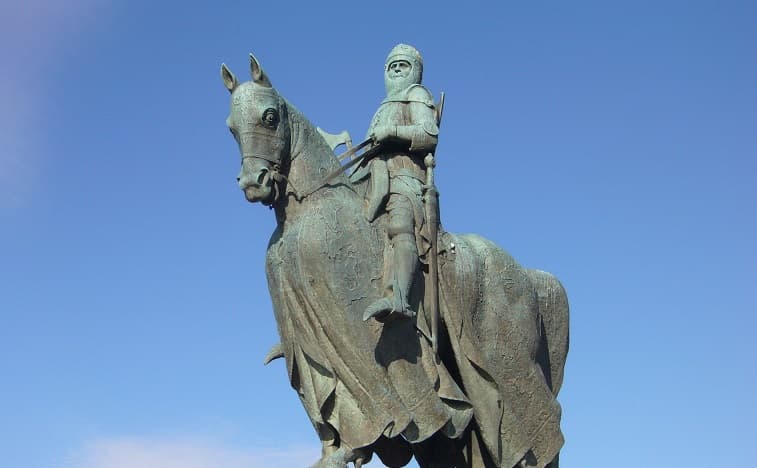 More about Robert the Bruce

So who was Robert and how did he become king?

Born in 1274 into an aristocratic family, his grandfather was one of the claimants to the Scottish throne during a succession dispute in 1290.

In 1305, Scotland had been fighting for independence from England for 9 years. William Wallace had been put to death, King Balliol was in France, abdicating the throne, and after many wars, only pockets of resistance were left. King Edward I of England appeared to own Scotland.

The King of England was on a crusade to take over Scotland once and for all, bringing an end to the wars of independence. However, there was a secret movement in Scotland that he was not aware of.

What was the secret movement?

At that time, the Pope was extremely powerful and held a lot of influence over the fate of the Scots. Spiritual powers were politics in disguise, and no-one but the Pope could set the final seal on King Edward's success. Edward travelled to Rome to claim that there could be no Scottish King, as the Kingdom of Scotland no longer existed.

However there had been a secret movement in Scotland, two bishops, Lamberton and Wishart, were also on their way to Rome to remind the Pope of the traditional status of Scotland as "Rome's special daughter", and that it required his protection.

The Pope listened to the two bishops. King Balliol was freed, but he no longer wanted to be King of the Scots. The bishops then looked to elect a new king, someone with a claim to the throne.

Did Robert have a claim to the throne?

Yes, both Robert the Bruce and John Comyn had claims to the throne. John Comyn was a nephew of King Balliol, and was therefore a serious threat for the Bruce. The two had strong personal differences, which they were reluctant to overcome. After being warned of Comyn conspiring against him in allegiance with the King of England, Robert met Comyn in Dumfries, accused him of treachery and the two came to blows. Bruce killed Comyn in the Chapel of Greyfriars Monastery.

Robert killed a man in a monastery?

With the church on his side, and his new title of King of Scots, Robert wasted no time to seize the rest of Scotland and begin his campaign for Scottish Independence by force. He travelled through the Highlands, waging war on any clans that disputed his claim to the throne. His efforts were met with strong resistance and bloody battles ended in large casualties for Robert: his wife, daughter and bishops were captured. Robert's brother was hung, drawn and quartered.

His luck began to change. Edward I of England passed and was succeeded by his son, Edward II. Unlike his father, Edward II lacked the technical skill for warfare, and certainly didn't have the strategic skill his father had. The new King left Scotland for 3 years, allowing the Bruce's army to grow and strengthen.

I've heard of the Battle of Bannockburn, what happened?

In Spring 1314, only Stirling and Berwick remained in English hands. Edward II, stationed at Berwick, was heading to Scotland to face the Bruce, however with an army lacking nobles and knights.

Bruce's army were hardened warriors, in their own lands that they knew very well. The Bruce knew where to fight, his men hid in trees on land broken by streams. At Bannockburn, they dug pits in the ground, disguising them with branches to hinder the opposing infantry. The English were doomed from the beginning; forced in to a tight, bottle-necked valley with no elbow room, they were susceptible to ambush.

The battle lasted two days, in which the English suffered heavy losses and the Scots had a resounding victory.

What happened after Bannockburn?

Bruce managed to trade English prisoners for the release of his bishops, his daughter, his sister and his wife. He could now focus on having a male heir to claim the Scottish throne.

Scotland's armies were free to invade northern England, much to the dismay of Edward II. After the declaration of Arbroath, a document sent to the Pope asserting the antiquity of the Scottish people and their monarchy, Robert received papal recognition as king of an independent Scotland. England declared peace on Scotland, and all claims of English superiority over Scotland were renounced.

Robert died in June 1329, his body buried at Dunfermline and his heart buried at Melrose Abbey. His legend lives on to this day, and a statue was erected at Bannockburn in his honour.

If you'd like to walk in the footsteps of King Robert the Bruce, why not learn more about the tours we offer: tours from Edinburgh, or tours from Glasgow.