A face and name that many visitors to Edinburgh, and Scotland as a whole, will see in abundance will be that of the prominent historical novelist, playwright and poet Sir Walter Scott. Many of his works are still read to this day including his more famous works ‘Rob Roy’ and ‘Ivanhoe’ to name but a few. 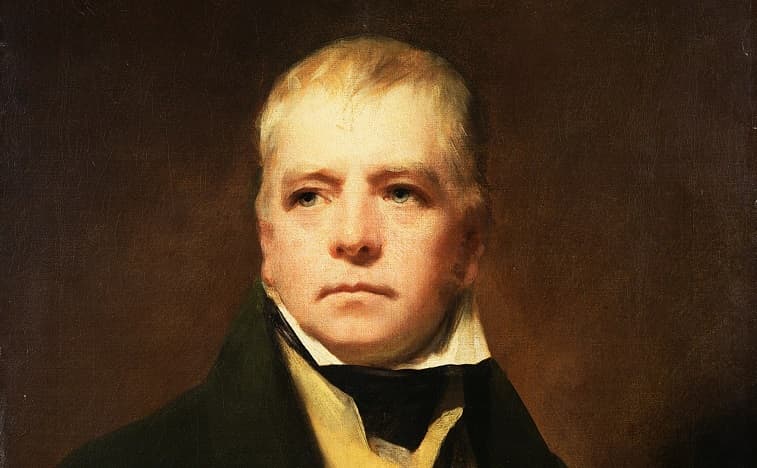 Born in 1771, Scott was raised in the Old Town of Edinburgh. However after surviving a bout of polio, the fallout of which would affect him for the rest of his life, he was sent to the Scottish Borders to stay with his paternal grandparents in order to recover. He would eventually return to Edinburgh for his education which would ultimately lead him to successfully complete his studies to become a lawyer.

Scott was an avid reader and loved to hear the stories of Scottish folklore during his time in the borders. He took his hand to writing; firstly be translating works from Europe before moving on to original poetry and fiction, the bulk of his work being published between 1814 and 1820.

Unfortunately in 1825 Sir Walter Scott was left ruined due to the bankruptcy of the Ballantyne Printing business, where he was the main financial backer. Scott refused to declare bankruptcy himself though and stated that he would write himself out of debt, alongside selling his Edinburgh residence.

Eventually poor health would affect Scott, he retreated to his home in Abbotsford which he designed & built just outside of the town of Melrose. He died in September 1832 and was buried next to his wife in Dryburgh Abbey, just outside of Melrose. Abbotsford house is now open to the public where you can learn a bit more about Sir Walter Scott in the surroundings that inspired him.

Visitors to Scotland may have a glint of recognition of Scott’s face without realising why; this would be because there is a prominent portrait of Sir Walter Scott featured on Scottish currency. He appears on the tercentenary series of £5, £10, £20, £50 and £100 bank notes which were released in 1995. The reason for this is that Scott was a campaigner against the currency reform proposed by Westminster Parliament in 1826 which would’ve prevented the Bank of Scotland from printing their own currency.

The most obvious landmark on Edinburgh’s skyline that commemorates Scott is the Scott’s Monument towering over the east end of Princess Street, next to Waverley train station (which was named after a Scott’s novel). With construction finished in 1844, this is the largest monument to a writer that currently exists, and stands at 200 feet & 6 inches.

Visitors are able to enter and climb up the tower though it’s no mean feat at 287 steps in order to reach the top, and it is a tight squeeze the higher you go. Many people find it worth it though as the views of the city skyline are nearly unparalleled in the city of Edinburgh.

The tributes to Scott are not solely in Edinburgh though as visitors to Glasgow’s George Square; the large column with a statue of Scott sitting atop of it. This was created in 1838, at the time many statues and tributes to famous Scots were being erected in the square at the time though Scott’s tribute stands out the most. All our passengers departing from Glasgow at 266 George Street will be able to see the structure for themselves before their tours departs in the morning.