The impact of pollution from our oceans has a massive visual impact on our beaches, but it obviously goes far beyond that; harming birds and other wildlife and ultimately impacting human health.

By 2050, there will be more plastic than fish in the sea.

The good news is, there is a growing public backlash against the use of harmful plastics, with pressure being applied on the Government and manufacturers to significantly reduce the use of them. Although there has been significant progress, such as a deposit return scheme for plastic containers in Scotland hopefully being introduced soon, new schemes and programmes take many years to action and even more years to see the positive effects.

We all have a duty to be aware of our plastic use and recycling. We can also be pro-active with our efforts in protecting the environment by participating in clean-up days across the country.

On 7th June, some of the Timberbush Team headed to Silverknowes Beach on the outskirts of Edinburgh, to take part in our own beach clean day. 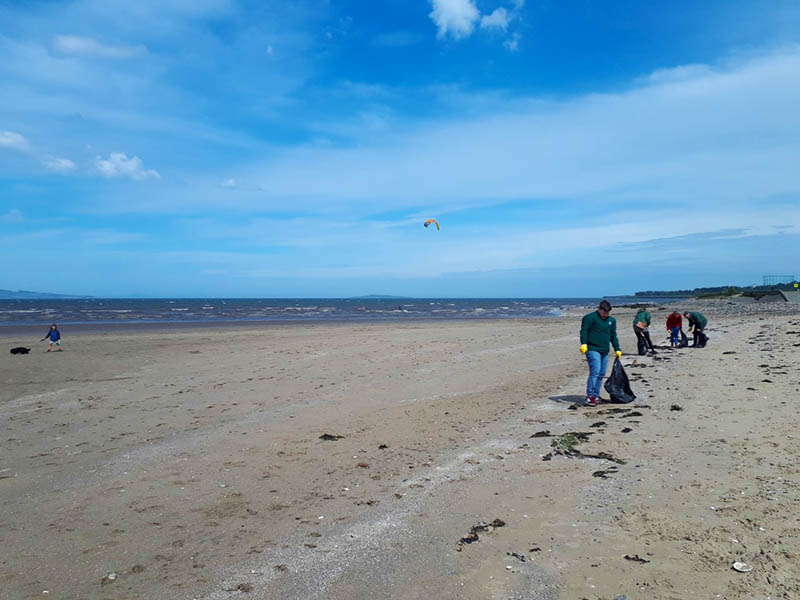 Silverknowes Beach lies north-west from Edinburgh City Centre, between Queensferry and where the Royal Yacht Britannia is berthed. The beach is made up of a combination of sand and pebbles, with people drawn to it due to the popular Crammond Island.

The Timberbush Team didn't go for the sight-seeing or sun-bathing though; we went to tackle the increasing volumes of rubbish being washed up on the beach. The weather forecast for the afternoon was less than positive, with showers expected for the rest of the day, but we remained optimistic and determined to clear as much as we could.

We were expecting to be mainly picking up cans and plastic bags, but wet wipes took up most of our time and our bin bags.

The use of wet wipes is increasing by 15% each year, with many being flushed down toilets. Some people are unaware that certain wet wipes do contain plastics and aren't biodegradable; resulting in clogged up sewers and many being washed ashore.

Unfortunately, we could stand still and spend 5 minutes picking up wet wipes in our vicinity with a litter picker. There was that many! It was quite shocking to see just how bad it was and how easy it was to fill a bag with them.

Our team slowly worked our way across about 100m of beach, moving up and down to ensure we picked up as much as we could. Within a couple of hours, we managed to fill several bags with rubbish and the beach was in a much better state. We also managed to do this without being hit by the rain, which was certainly a bonus! 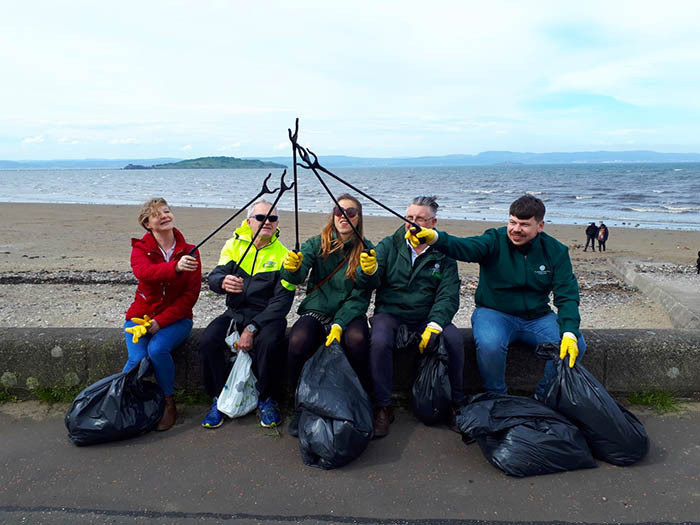 It was satisfying to see the positive impact we had on the beach in a relatively short period of time, but it also acted as a gentle reminder of the negative impact we can cause on our environment.

Timberbush Tours is committed as a company to preserve and maintain Scotland's natural beauty. We travel through the Scottish countryside everyday and we're always aware of the effect our business has on the environment. This is why we take part in beach cleans and tree-planting every year, as well as many other schemes. You can read more about our green ethos here.