Seen as a national treasure and possibly Scotland’s greatest export… for the acting world at least, Sean Connery has been a fixture of stage and screen throughout the last 60 years. 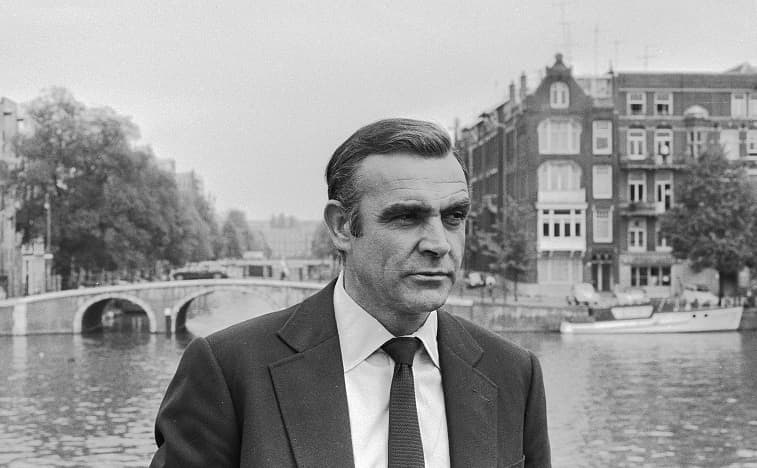 On the 25th of August, 1930 Sean Connery was born, raised in Edinburgh’s Fountainbridge to a working class family where the family had routes Scotland particularly in Fife and Skye. Though the building that he grew up in is no longer there you can still have a lovely time exploring the Union Canal and there are still plenty of examples of the Tenement Buildings that once decorated the area in abundance.

Leaving school early to work in various remedial occupations; he was a milkman before joining the Royal Navy. Later discharged due to medical grounds he returned to his job as a milkman before taking on other employment. This included lorry driver, a life guard at Portobello beach, an artist’s model at Edinburgh College of Art, a coffin polisher and a labourer. He eventually became a bodybuilder for a short time and quite possibly could have been a professional footballer. It was acting though that Connery had his heart set on and thus this is what he pursued and began by being a stage hand at Edinburgh’s Kings Theatre.

Although he starred in several movies beforehand, normally as an extra or bit parts, it wasn’t until he was cast in the role of James Bond that he became a household name worldwide. Although author Ian Fleming believed Connery to be wrong for the role initially, he changed he opinion fully once he watched the first bond movie ‘Dr No’. He was so enamoured in fact by Connery’s performance that he fleshed out Bond’s background story to reflect a Scottish ancestry, as seen recently in the film ‘Spectre’ with Daniel Craig in the Bond role.

This is not the only film role that Connery is known from as he has had several big movies out over the years including ‘The man who would be King’, ‘Murder on the Orient Express’ and ‘Marine’. Most of the time he would play Scottish characters due to the unmistakeable accent that has become world famous and much imitated. This was not always the case, with somewhat hilarious results especially in 1986’s Highlander, where Connery played the role of Juan Sánchez Villa-Lobos Ramírez, an Egyptian, with his usual Scottish accent fully present.

It was once he stretched himself accent wise and took on the role of Jimmy Malone in Brian De Palma’s ‘The Untouchables’ that Connery would finally win his Oscar for Best Supporting Actor. After receiving this Oscar, Connery would go onto star in a variety of films in different genres; notably joining the successful adventure franchise with ‘Indiana Jones & the Last Crusade’ as well as the action film ‘The Rock’. His last film was the comic book adventure ‘The League of Extraordinary Gentleman’ but it wasn’t until 2006 that Connery confirmed that he had retired from acting. Confirming his feelings on the matter when asked if he may return to the screen, “Retirement is just too much damned fun”.

If you’re a fan of the actor, there is still plenty of sights to see from the actors upbringing located in Edinburgh. Or maybe you would like to see the sights of his ancestry which our St. Andrews & the Fishing Villages of Fife or our Isle of Skye, The Highlands and the North West Highlands tours showcase. Maybe you want to see some of the sights from his filmography thus the Loch Ness, Glencoe & the Highlands or our Eilean Donan, Loch Ness & the North West Highlands tours would be ideal for you. Whatever you are looking for we will have a tour that is ideal for you…