Rosslyn: A Treasure in Stone

Rosslyn Chapel has long been linked to secretive organisations, such as the Freemasons, the Knights Templar and even the Holy Grail. Countless writers and artists, such as Wordsworth and Sir Walter Scott, have found inspiration in its intricate carvings, leading the chapel to be affectionately known as a treasure in stone. 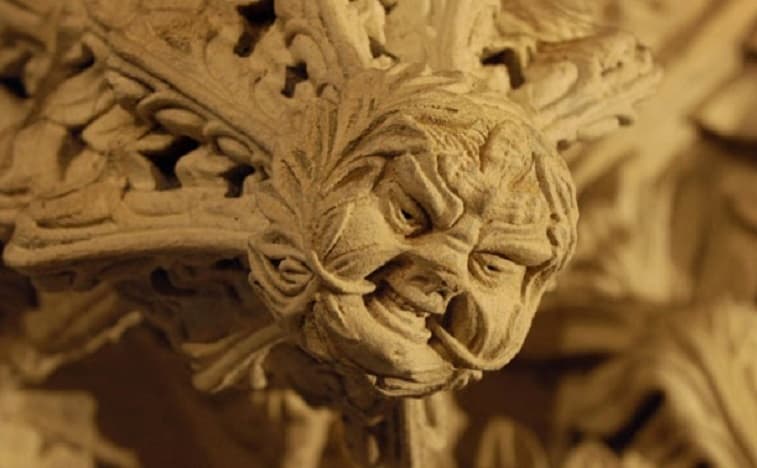 It could be said that the chapels carvings are unlike any other in the world. Every surface is covered in beautifully intricate designs, each telling its own story, and taking an impressive 40 years to finish.

But what influenced these largely forgotten artists to create such beautiful carvings?

Originally built as a family chapel for the Sinclairs, construction of the chapel began on 20th September 1456. At that time, many people were of the opinion that if you built a place of worship to God, it would be a passport into heaven. Nobles around the country tried to out-do eachother by each building increasingly lavish buildings to show their commitment to their faith, and also their influence and wealth.

Sir William Sinclair of Roslin had no intention of being out-done by his peers, and spared no expense in the building of Rosslyn Chapel. Each and every surface was carefully carved by trained masons, transforming the chapel into a 3D piece of medieval art.

Sinclair paid his Masons a grand sum of £10.00 and £40.00 to his Master Mason, an extravagant amount for the 15th Century which would equate to around £200,000 per annum nowadays. The masons created moral stories in stone at a time when many couldn't read. The carvings on the walls of the chapel depicted the ways in which one should behave, such as the 7 heavenly virtues and 7 deadly sins.

What other moral tales can be found on the walls of Rosslyn?

In medieval times many were interested in the mortality of life. We can find evidence of this on the walls of the chapel with the carvings of the Dance of Death (Danse Macabre). Here death, seen as a skeleton, is shown in many different circumstances, almost toying with life, to remind you that in the end, death always wins.

What is also curious about the chapel is what has come to be known as 'The Green Man' (displayed in the picture at the top of the page). This perculiar face can be found over 100 times carved into the building, but the meaning, like many of the carvings within Rosslyn Chapel, is far from clear and has been lost in history. Perhaps the Green Man, who blends in to the foliage behind him, was a pagan symbol representing nature and rebirth, or maybe it is a Christian image depicting mans origin in the Garden of Eden.

It is a wonder that we can still see these carvings today.

At the turn of the 17th Century, after the Reformation, the chapel was reduced to a ruin. Centuries of the Scottish elements took its toll on the beautiful artwork, the walls were saturated with rain. In the 1950s an attempt was made to restore the chapel to its former glory by covering the walls with a thick slurry. The work was meant to preserve the carvings, but unfortunately the thick mixture obscured some of the intricate details in the stone. With help from the renewed interest in the chapel due to the blockbuster film, The Da Vinci Code, millions of pounds were raised by generous donations to restore the building. The walls now dried, members of the public are free to take a tour of the chapel, investigate the carvings and discover its secrets.