Continuing with our Halloween theme; Robert Burns, Scotland’s most well-known poet, was not averse to exploring the macabre with his tale of witches, ghouls and the devil in his celebrated poem ‘Tam O’ Shanter’. Based on a local folktale which was rumoured to have begun by a farmer who needed to create a tale to tell his superstitious wife for why he had no money and was so unkempt… nothing to do with the drink at all. 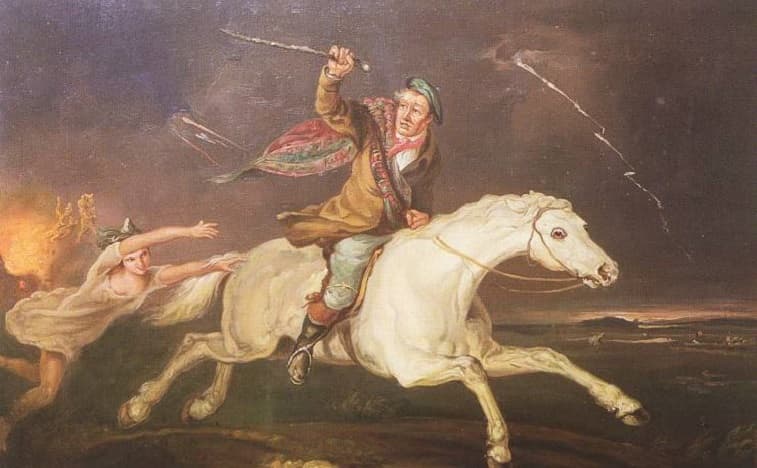 Tam O’ Shanter, a farmer in the town of Ayr, spends a bit too much time down the pub whilst his, increasingly, angry wife waits for him at home, this night seems to be no different to usual proceedings. Eventually taking note of the trouble that he will be in, Tam saunters out of the pub and begins his ride home on his horse, Meg.

It turns out to be cruel evening with the weather turning worse whilst Tam’s inebriated condition doesn’t exactly help him on his journey home. Eventually he approaches the local Kirk (Church), which he must pass by to reach the bridge that crosses the River Doon in order to reach home. He notices lights flickering and the sound of dancing and bagpipes emanating from the Kirk, an unusual sight. Tam goes to investigate the scene further, thanks to his drunken curiosity, despite Meg’s hesitancy to being directed there.

Once he reaches the church, hidden from view from those inside, he witnesses a ghastly scene! The church is host to the dancing of witches and demons, with the devil himself being the player of the bagpipes (take from that what you will). Those participating in the spectacle are surrounded by the tools of murder and other horrific artefacts that create horror in Tam.

Aghast but entranced by the scene unfolding in front of him, Tam continues to watch. As the witches being to strip to their undergarments Tam is still hushed due the ghastly scene in front of him. However, when a pretty, immodest witch comes to his attention, Tam can’t help but break his silence. He shouts out at the witch `Weel done, cutty-sark!’ and within an instant all the lights in the church go out and silence befalls the area! Suddenly all the witches and creatures spring for Tam, causing him and Meg to flee sharply from the scene.

It was common knowledge at the time that ghouls cannot cross a running body of water so Tam heads for home across the bridge on the River Doon where his safety is guaranteed. Despite Megs galloping, the witches catch up on them, with the witch that caught Tams eye being at the forefront of the chase. Just before Tam and Meg make it across the bridge, the witch snatches for the two but is only able to grab Megs tail which is removed completely. Luckily though the two make it over the bridge alive and more a less intact…

The poem is a great display of Scotland’s fascination with demonic creatures, humour in the most unlikely of circumstances and the things we’ll go through for a dram of whisky. Hopefully your trip to Scotland will be as event filled but without the dread!