With myself foisted on the driver-guide Graeme for the Highland Whisky, Woodland & William Wallace tour I’m starting to get the feeling that I’m not an essential body in our office… still that means I get some whisky. Snuggling into the comfortable 29 seater bus as this is quite the busy tour today, we have a bit of banter with our driver-guide Graeme.  It turns out that we have a wealth of different nationalities on our tour today, nothing like the prospect of a dram to bring people together. 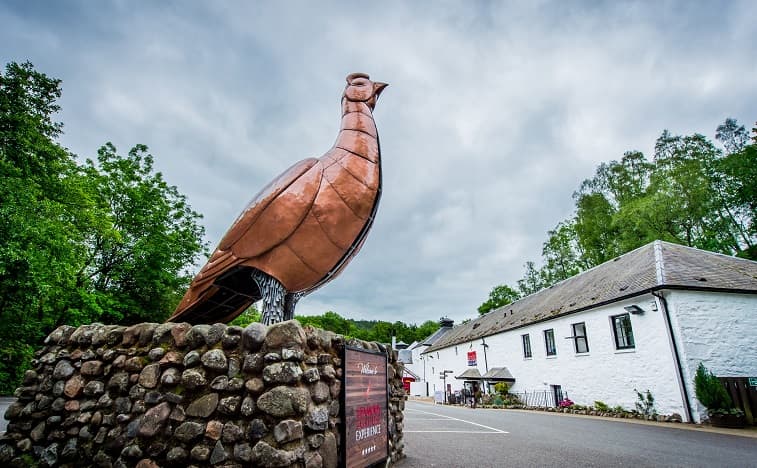 As we make our way to Perthshire for the Wallace Monument, we are treated to driver-guide Graeme’s exuberant commentary on the area which sets the tone for a fun day for all. Arriving at the Wallace Monument, a towering tribute to the legendary William Wallace, visitors can either brave the steep hill to the entrance or take the minibus provided… I opted for the minibus. Which I’m glad I did as traversing the steps up to the top of the monument was enough of a struggle. The tower circles, what seems, endlessly though you do receive a couple of respites to learn the history of the man behind the legend… and to see Wallace’s ridiculously large sword before reaching the summit and witnessing some of the most beautiful view of Stirling. After which I traversed the woodland hill back down to the bus as this proved to be a much more forgiving on my pins after the sea of stairs at the monument.

Once we were back on the road we took a stunningly picturesque route through Perthshire as we entered the Highlands. As we travelled along we made a very quick stop at Gleneagles Estate to have a look at the golf course, see how the other half live (very well from the looks of it) and take some pictures, or selfies as several of our passengers partook in. Once we sneakily left the grounds we made our way through the woodland roads to reach Glenturret distillery, Scotland’s oldest working distillery and also known as the Famous Grouse Experience.

Glenturret is a single malt whisky producer but they are more widely known as creators of Famous Grouse, the blend of several fine malts to make something uniquely theirs.  The distillery really is quite picturesque nestled in its woodland surroundings, we were treated to an informative and entertaining tour on the process of making Scotland’s, and a host of other countries, favourite tipple. Once the educational part of the tour was over we could all get into the serious business of the tasting! With two drams each we swirled, sniffed, savoured and drank, each mouthful was more than appreciated. After having the opportunity to pose next to the largest bottle of whisky in the world, we had an hour for lunch where any dietary and appetite requirements are catered for. Once some more pictures were taken it was time for the bus but although some of us were contentedly sleepy we still had a wealth of things to see and do before heading homewards.

As we drive along the Highlands we make a stop off at Hermitage for a short woodland walk which helps blow away any cobwebs that the whisky tasting may have brought with it. Although the walk is only about twenty minutes the scenery that you see within that time is wonderful, with the waterfall at the end of the walk being a rewarding highlight. Once we are done here it’s off to Dunkeld for a short time so that we can have another wander around this beautiful village and its spectacular bridge whilst grabbing a quick coffee.

Back on the bus and our trip back to Edinburgh begins, we all look like we could use a little snooze but surely that’s a sign of an event filled day. This tour really was a mix of everything; history, scenery, culture and booze! With departures from Edinburgh every Tuesday, Thursday and Sunday from 9:00 you really should really treat yourself to it.