Edinburgh is adorned with many interesting sights, but one that is particularly popular with both locals and visitors to the city is a monument to a wee Skye terrier known as Greyfriars Bobby. The monument is regularly surrounding by those wishing to take pictures and the occasional person who rubs his nose (which you should not be doing), that it may be time to remind ourselves with why this little dog is so widely known and valued. 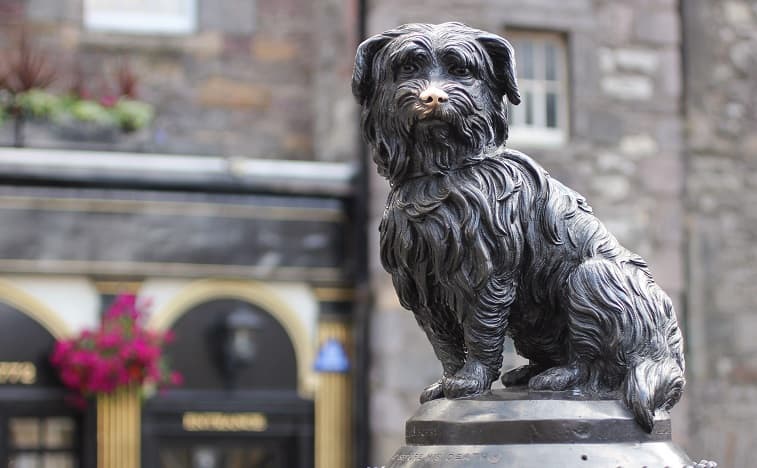 The popular and most well-known tale is that Bobby was owned by a police night watchman, John Gray, who passed away and was buried in Greyfriars graveyard, which surround the Kirk. Bobby spent the rest of his own life by his master’s grave, and thus became known as Greyfriars Bobby, his unusual behaviour led to Bobby becoming relatively well-known in the city. His celebrity had led the Lord Provost of Edinburgh, Sir William Chambers, to pay for Bobby’s licence and to adorn him with a dog collar, which is currently on display in the Museum of Edinburgh, in order to ensure that he could remain by his masters grave.

Bobby died in 1872, having spent 14 years by his master’s side, and was buried in Greyfriars Kirkyard near John Gray’s grave. To commemorate the loyal dog, a memorial was commissioned for Bobby one year after his death, the statue at the end of George IV Bridge, at the top of Candlemaker Row. Although the statue was originally a drinking fountain, with an upper fountain for humans and a lower fountain for dogs. The memorial was later adapted from its fountain usage into the statue that you see today.

Another, less well-known, memorial for Bobby was was erected in 1981, a gravestone located in Greyfriars Kirkyard, easily seen due to its red granite stone, the inscription on the stone reads "Greyfriars Bobby – Died 14 January 1872 – Aged 16 years – Let his loyalty and devotion be a lesson to us all." A lovely message that succinctly explains why so many are enamoured with this particular tale.

The story of this loyal dog Bobby brings many visitors to his memorial which is a must see if you’re visiting Edinburgh, our tour departure point is nearby so you can always pay Bobby a wee visit before or after your tour with us. Just remember not to rub his nose!