Skip to main content
Home / News & Offers / Braveheart - The facts behind the fiction!

Braveheart - The facts behind the fiction!

William Wallace’s popularity in Scottish history is almost unbridled due to the victories he had over the English and his eventual martyrdom. The movie ‘Braveheart’ which showcased his tale, with the usual Hollywood embellishments, was a massive film both in scale, scope, box office takings and awards wrangling. Timberbush Tours take a look at the facts behind the fiction of the history of Wallace. 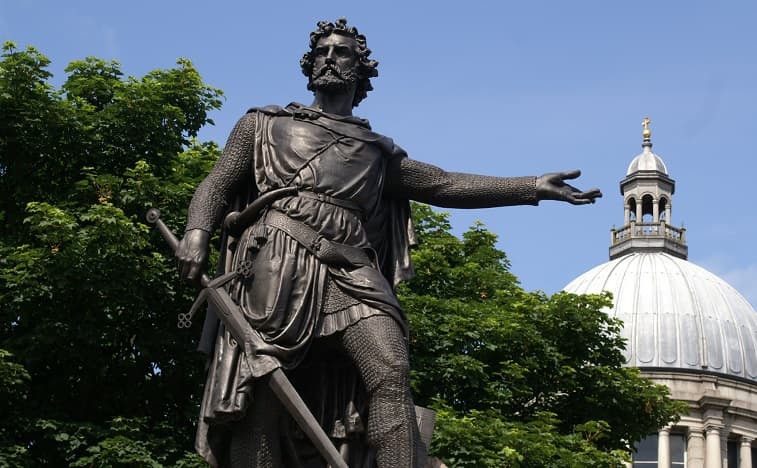 During Wallace’s adolescence Scotland was enjoying a time of independence and peace thanks to the reign of King Alexander III. Following his death in 1286 the scramble for the crown set in motion the eventual takeover of Scotland by King Edward I of England. This occurred in 1296 after the Battle of Dunbar, after which King Edwards’s forces were met with little resistance as they continued their march up North. It was the next year when Wallace made his first act of defiance against the English, which was assassination of William de Heselrig, the English High Sheriff of Lanark. This was not an isolated though, as several uprisings across Scotland were taking place in retaliation towards the English.

Four months after this incident, Wallace was leading troops into battle for his most famous victory, the Battle of Stirling Bridge. The Scottish forces were vastly outnumbered but by using the narrowness of Stirling bridge to their advantage, which could only hold up to three men across, the were able to obtain victory against the odds. By waiting until about half the army crossed the bridge, the Scots ambushed the English and prevented further reinforcements from crossing the bridge. This led to panic and confusion in the English camp and their eventual retreat.

Hugh Cressingham, King Edward's treasurer in Scotland, died in the battle and it is rumoured that Wallace used his a strip of his skin from head to toe to his as a baldric for his sword. In the aftermath of the battle, Wallace was proclaimed Guardian of Scotland and eventually knighted by the Scottish earls.  However, it wouldn’t be long till events would take a turn for the worse for Wallace and the Scots.

The battle of Falkirk took place in 1298 after a renewed campaign against Scotland from King Edward. The English campaign retook much of the Lowlands before they met Wallace’s forces in battle, which the English decimated thanks to the use of longbowman. Wallace was able to make his escape but many Scots died in the battle and Wallace’s reputation was tarnished in the defeat. Due to this Wallace resigned as the Guardian of Scotland, and it is rumoured travelled to France in order to try and gain support from King Philip IV of France for Scotland. This did not come to fruition though and Wallace returned to Scotland empty handed.

Wallace was involved in skirmishes against the English for several years where he was able to evade capture until 1305. He was taken to London where he faced trial for treason, where he stated "I could not be a traitor to Edward, for I was never his subject." Of course, Wallace was found guilty and entrapped in the Tower of London before he was taken to his execution. There he was hung, drawn and quartered, his head placed on a spike on London Bridge, with the remainder of his body parts spread across Scotland and England. Wallace’s actions put Scotland on the road to independence which culminated at the Battle of Bannockburn led by the Scottish King, Robert the Bruce.

With Timberbush Tours you can explore the legend of William Wallace and witness the areas of battle. On our Loch Lomond, the Trossachs National Park & Stirling Castle tour from both Edinburgh and Glasgow where you can see where the Battle of Stirling Bridge took place and learn why Stirling was such a fought after location. You can also take our Ultimate Whisky Experience tour, again from both Edinburgh and Glasgow, where you will be taken to the Wallace Monument and learn a bit more of Wallace’s past endeavours with a dram to savour afterwards. So there really is no excuse not to learn about one of Scotland's most revered heroes!